Go! Younha is Younha's first Japanese album. The title of the album has the same pronunciation as Younha's real name. The first press edition included a special photo book, "A day with Younha", and special packaging. The album reached #10 on the Oricon daily charts and #13 on the weekly charts. It charted for six weeks and sold 28,927 copies. 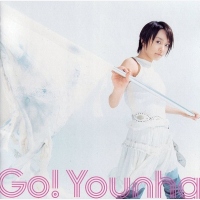