During an interview, Nick Jonas stated that the album "V" would not be released but that the band had decided to digitally release 16 recordings to Team Jonas fan club members. "We want to do something special for our fans because they've been so supportive of us for so many years. What we've decided to do is package an album with 10 live tracks from the summer tour and four of the songs that would have been on V, and if you count 'Pom Poms' and 'First Time', it's actually 6 songs that would have been on V. We'll be sending that out soon for the fans." The album was released digitally with the title LiVe, noting the letter "V" in caps as a reference to their would-be fifth studio album of the same name. 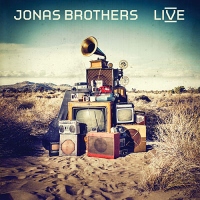